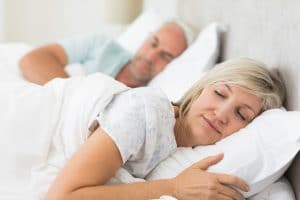 Millions of people and their loved ones around them suffer from the adverse effects of snoring. If you snore, you are not getting the rest you should from your sleep. You may also be at risk for sleep apnea and other serious health disorders.

There are many different ways to stop snoring, many of which include painful, expensive surgeries, or other methods that are not safe.

What are Snore Guard Appliances?

These small oral appliances are used only during sleep. They prevent the jaw and tongue from dropping back into the throat and closing off the air passage. Keeping the air-way open greatly reduces snoring.

Each appliance is designed to be custom-fitted to the individual. Fitting is quick and painless and only takes a few minutes. You can stop snoring at night!

If you would like to learn more about how to stop snoring, call us today to set an appointment.

Sleep apnea is the most common and the most dangerous sleep disorder. People who suffer from sleep apnea stop breathing dozens of times during sleep. This can be particularly severe and life threatening when there are more than twenty or thirty stoppages per hour. Because the heart is sensitive to oxygen levels in the blood, apnea is most dangerous in people with some form of heart disease.

There are three types of sleep apnea:

Central sleep apnea is a rare form that is caused by a problem in the central nervous system. The respiratory center in the brain that is responsible for breathing fails.

As its name implies, obstructive sleep apnea occurs when the upper airway is obstructed. This is the most common type of sleep apnea and the most serious. Soft tissue in the palate, throat, or tongue may block the flow of air as a person struggles to breathe.

Video: Top 5 Signs You May Have Sleep Apnea

Please call us with any questions or to schedule an appointment.